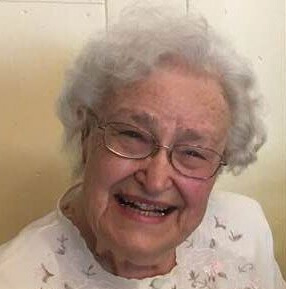 Velma Oakes, 91, of Chico died on Wednesday, June 2, 2021 after a brief illness. She was born in Chickasha, Oklahoma to the late Eldon and Minnie Wilder. She was the oldest of three children.

Velma and her family fled Oklahoma during the Dust Bowl Days when she was only 6 years old, her sister was three, and her brother was in diapers. They moved to California, eventually settling in Vacaville.

Velma graduated from Vacaville High School in 1947 and received her BA in Education with a minor in Music in 1951 from San Francisco State University. Growing up, Velma and her sister Wanda both played piano and sang duets, one of their favorite past-times. They sang in the choir at church, led by their beloved choir director, Mrs. Fruhling.  Velma frequently played piano in church. She was also an avid reader and enjoyed crossword puzzles.

Velma was a devout Christian and lived her life in accordance with those principles. She and her husband Cliff were active members of the United Methodist Church. She led Bible studies, was on the board and other committees

She married the late Clifton Oakes in 1950, and they lived in the Sacramento area before relocating to Placerville in 1974. Eventually they retired to Etna, a rural community in northern California, where they lived for 17 years, just a block from her beloved sister and brother-in-law, and nephew. In 2019, they decided to move to Chico to be closer to their children, due to age and Cliff’s declining health.

Velma is survived by her daughter Karen; her son Phil (Ileana); two grandsons, Scott and Mark; and her beloved sister Wanda and her brother-in-law Al Kiep. She is also survived by a number of much-loved nieces and nephews and their families.

A celebration of life will be held on Wednesday, June 9, 2021, at 1:00 p.m. at Newton Bracewell Funeral Home in Chico. The burial will take place at the Glen Oakes Memorial Park cemetery.